If A Robot Can Be More Brilliant Than An Artist. Here Is Ai-da, The First Android Painter, And Her Exhibition 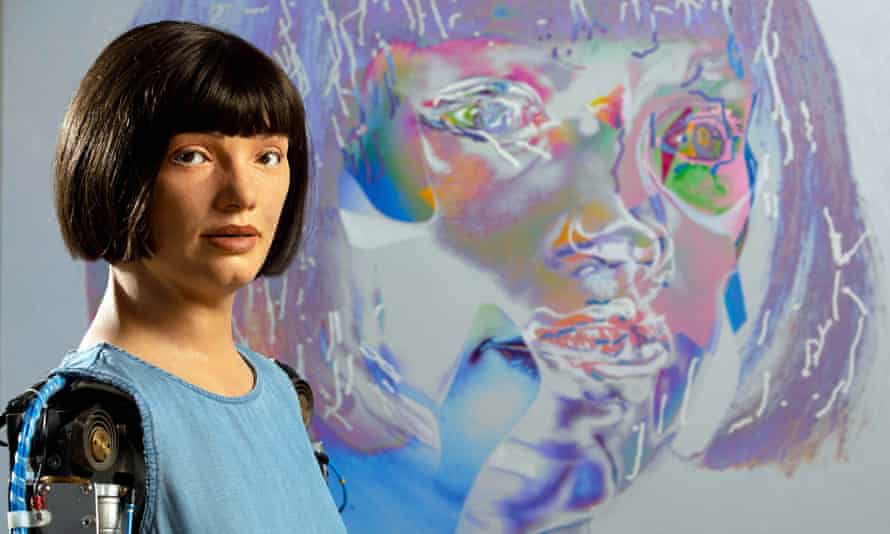 Who said that only human beings can be creative? Apparently, today we have evidence that robots can create works of art. Proof of this is the android Ai-Da.

Today I want to tell you about this amazing girl made of steel and artificial intelligence.

Brush in hand, eyes focused on the canvas and algorithm that calculates and processes how to give color to the canvas. This is how Ai-Da works. The exhibition displayed not so long ago at the Design Museum in London with all her paintings is all her. I’ll tell you about that later.

Ai-Da is the first android painter. She was created in February 2019.

“Her body was built by researchers from the British robotics company Engineered Arts, who gave her a lifelike human appearance.”

In particular, the head is finished in silicone, the teeth and gums have been 3D printed and the eyes are equipped with ocular cameras.

“While the researchers of the University of Oxford and Goldsmith’s College in London have programmed the Artificial Intelligence that animates the Robot and makes it an artist capable of autonomously creating works of art”.

In fact, Ai-Da is able to observe reality with eyepiece cameras. With the algorithmic processes, she manages to rework what she observes. Finally, with her robotic hand, she draws her interpretation of reality in black and white.

HOW DOES SHE HAVE CREATIVITY AND PAINT 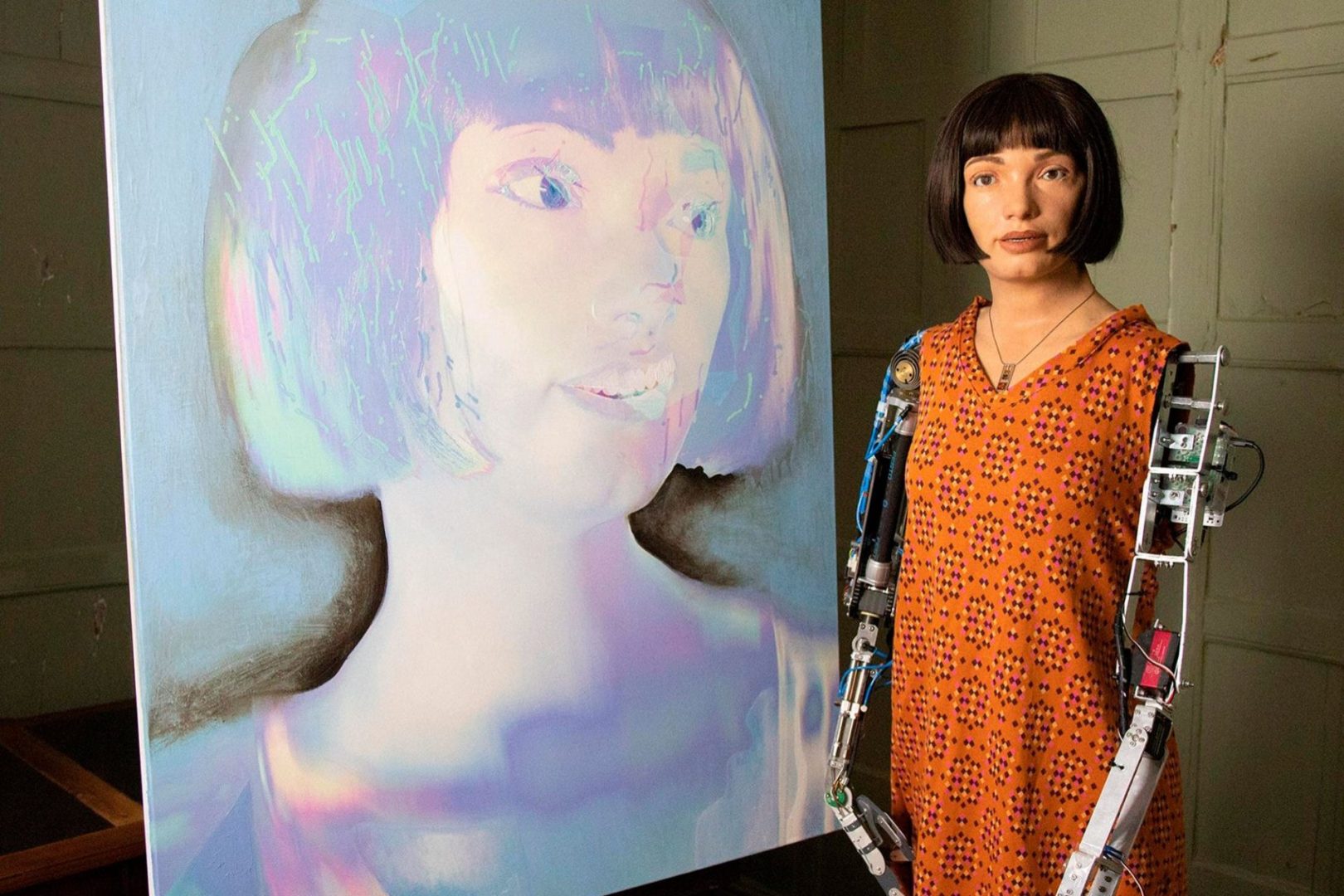 The engineers who built Ai-Da believe she will be able to create art that is not constrained by human limitations such as physical strength or hand coordination.

The robot consists of a computer, an electric motor, and a mechanical arm. The robot paints pictures on canvas using oil paints, just like a real painter.

How does she do it? Simple …

She does so thanks to artificial intelligence (AI). AI has the ability to learn from their own experience and use this knowledge to make decisions about how to paint each painting.

A bit like when they say only human beings are able to feel or communicate certain things. Then we see extraordinary things done by certain animal species or some domestic animals.

Here, however, in this case, we can reproduce creative robots in series.

IS SHE THE NEW VAN GOGH? 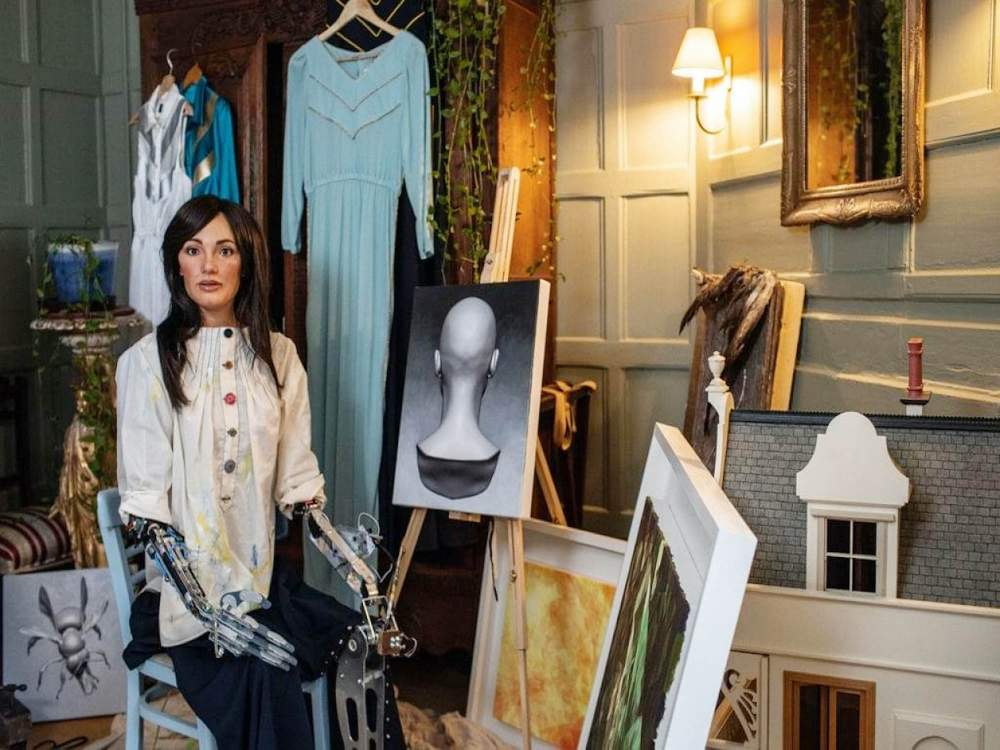 As I explained above to create paintings, Ai-Da uses artificial intelligence algorithms that can be programmed with styles or different models.

She also has sensors that allow her to perceive colors on the canvas as well as colors on the brush or spray can. Because she can also use spray cans for street art.

“Ai-Da can imitate more than 40 painting techniques, from abstract art to realism, with more detailed characteristics of human effort”.

Among these techniques, are surrealism, and abstractionism, as well as being able to imitate human emotions in her work.

Aidan Meller, the creator of Ai-Da, describes her as the world’s first ultra-realistic robot artist.

“One day I was playing with Legos with my son and he built an automaton,” says Meller. “So I said to myself: if the great artists are the ones who reflect on the problems of every era, then what would happen if we could produce a machine equipped with artificial intelligence to discuss the impact of technology on our existence?”.

After two years of work, thanks to a team of programmers, robotics experts, and psychologists, Ai-Da came to light in 2019.

It was then unveiled to the public with the Unsecured Futures exhibition at the University of Oxford, whose goal was to encourage viewers to reflect on world changes.

THE FIRST EXHIBITION CREATED BY A HUMANOID

To make Ai’s face – Da the team of engineers and other scientists took inspiration from Ada Lovelace. She was a British mathematician who pioneered the computer.

The result was a face with seductive air. Her eyes, because of those cameras installed inside always seem to follow the interviewer.

This robot artist is also a well-rounded artist. I mean, she does a lot of other things, not just paint.

She has made tremendous linguistic progress. To think she held a Ted Talks, composed a poem inspired by Dante, and was also interviewed live by Tim Marlow, CEO, and director of the Design Museum in London.

It was in this museum in London that the Portrait of the Robot exhibition took place, in which the artist-robot created all the works.

Ai-Da was finally the heroine of another incredible event that attracted thousands of visitors.

Nadine Abdel Ghaffar, founder of the association for the promotion of the arts, Art D’Égypte, saw Ai-Da for the first time in Abu Dhabi:

“It aroused many doubts: I was not sure the idea of a robot was acceptable – an artist and I’m not even now. But, at the same time, I felt the need to open a debate “.

So she decided to reserve for Ai-Da a collateral exhibition of Forever is Now, the first exhibition of contemporary art, at the pyramids of Giza.

I believe that all this is fantastic and a bit shocking at the same time. It is not easy to accept the idea that art can be made by cold, emotionless machines.

We will have to accept it. However, I believe that something fascinating and incredible remains, but never equal to the authenticity of what man can achieve.

I believe only man can move the soul and be the hero of cultural revolutions.

🎁 I have also prepared a gift for you. Join my Telegram group and receive my free guide: How Androids and Technology Will Change Humanity and the Future of Society. Click on this link and get the free guide now: t.me/sirnicknite