“I never had it in mind that I would start a company one day and it would really be successful. I have just been motivated by working on interesting technology.” — Pierre Omidyar 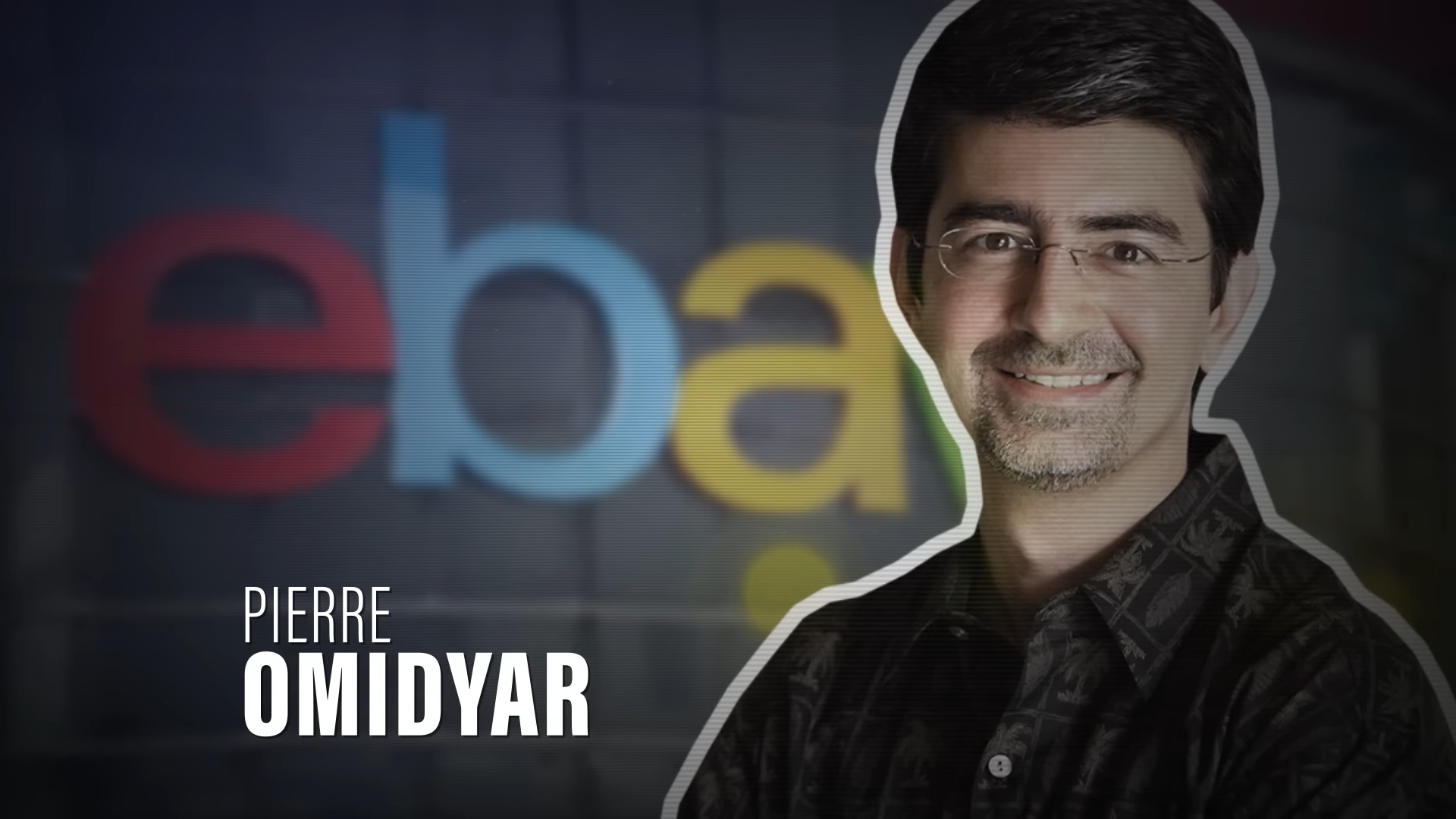 Pierre Omidyar is widely credited with inventing e-commerce with his online auction website eBay. When the company went public in September 1998, he became insanely wealthy, according to him.

He had earned $7.8 billion when he was featured on Forbes’ 1999 World’s Billionaires list the following July. The eBay founder believes that when you don’t know what to expect, you should be prepared for the unexpected.\

Let’s take a look at how he got to the top.

Pierre Morad Omidyar was born in Paris on June 21, 1967, to Iranian parents who had emigrated to France for higher studies.

His mother, Elahé Mir-Djalali Omidyar, holds a doctorate in linguistics from the Sorbonne. His father, Cyrus Omidyar, is a surgeon who completed his medical studies and training in France.

When Omidyar was a child, his father immigrated to the United States with his family and worked as a urologist at Johns Hopkins University in Baltimore, Maryland.

– Omidyar was a student at Punahou School in Honolulu for a few years and currently serves on its Board of Trustees.

– In ninth grade, he enrolled at The Potomac School in McLean, Virginia, where his interest in computers flourished. He would frequently slip out of physical education classes to play with the computers at his high school.

– Rather than punishing Omidyar for skipping class, the principal engaged him to develop a computer program that would manufacture catalog cards for the school library at a pay of $6 per hour. It wasn’t much, but it was something.

– He graduated from St. Andrew’s Episcopal School in Potomac, Maryland, in 1984. He received his degree of bachelor of science in computer science from Tufts University. in 1988, as well as from the University of California, Berkeley.

PIERRE OMIDYAR STARTED HIS CAREER AS A STANDARD EMPLOYEE

Shortly after studying, He began working with a software company called Claris, a subsidiary of Apple, and helped his team develop ‘MacDraw II’.

In 1991, Omidyar being a software fanatic, founded ‘Ink Development’ a small-scale pen computer firm with a few associates. Two years later, the founders of ‘Ink Development’ renamed the company ‘eShop’ and began to focus on e-commerce.

THE FOUNDING OF EBAY

Along with his daily work, he considered building a market in which anybody could benefit from participation, leveling the playing field, and he believed that the Internet and the web would be excellent for this.

The history of eBay, which began as AuctionWeb on September 3, 1995, is fairly interesting. The then-fiancée of eBay founder Pierre Omidyar lacked a Pez dispenser. Omidyar was inspired to create a platform for online sales and purchases by her desire to easily expand her collection.

As a result, he developed an auction website for individuals. One of the first items sold on AuctionWeb was a broken laser pointer for $14.83, which stunned Omidyar because no one would buy a broken laser pen.

Omidyar was working from home when his Internet provider began charging him more. AuctionWeb began as a free site, but it quickly expanded in popularity to the point where Omidyar’s Internet service upped his monthly fee to $250.

Omidyar decided to begin charging now that he was losing money. He established a fee structure similar to eBay’s today; a small fee for listing an item and a percentage of the final sale price.

Omidyar’s daily mail was filled with pennies and dimes tied to index cards. But the small payments were pouring in. eBay made $1,000 in the first month, which exceeded the amount it cost to run. Omidyar realized he was onto something when he posted a sale for a broken $30 laser pointer.

He stated quite clearly that it did not function, even with new batteries, and set the price at $1. Strangely, a bidding battle erupted, and he was eventually outbid for $14. Meanwhile, sales on the site continued to grow, with $2,500 in the second month, $5,000 the next month, and $10,000 the month after that.

Omidyar finally realized that he has a side hustle that pays more than his day job and that it might be time to quit his day job. In September 1997, the company formally changed the name of its service from AuctionWeb to eBay, after Omidyar’s consulting firm, Echo Bay Technology Group.

‘eBay’ had established its stock exchange, and the company’s shares quickly generated an estimated $4.45 billion in revenue.

Success and growth are hardly ever predictable. In the middle of 1999, eBay experienced numerous rather public failures, including a 22-hour outage followed by an eight-hour outage. It had a sizable community back then.

Omidyar, the founder of eBay, was stressed with a large community and CNN satellite trucks in the parking lot. He worried that the company would fail as the entire world watched.

He grasped the importance of infrastructure and technology. He secured strategic partners for his company, worked tirelessly with his team, and did whatever it required to keep his company running.

The company made 10,000 phone calls to the site’s top users to apologize for the disruption and promise them that everything feasible would be done to keep the service up and operating in the future. While other internet businesses failed during the dot.com bust of 2000, eBay continued to thrive.

On eBay, he was a pretty consistent bull and cheerleader. He was deeply concerned about his community. People criticized him at times, but he stayed firm and continued to improve his company, and eventually gained this unshakeable trust that his company would survive.

OMIDYAR DID NOT STOP AT EBAY

– In 2004, he and his wife, Pamela, established the ‘Omidyar Network,’ which provides funding to small enterprises that try to make a positive effect in society. Omidyar Network has invested over $1.5 billion in impact investments and charities that address global issues.

– Omidyar owns shares in resort assets in California and Mexico, and he is now building real estate in Cabo San Lucas, Mexico.

– The successful entrepreneur launched the media company ‘First Look Media,’ as well as its subsidiary, ‘The Intercept,’ which delivers internet news, on February 10, 2014. Glenn Greenwald, Dan Froomkin, Jeremy Scahill, and Laura Poitras were among the journalists in the group.

– In October 2018, his network spun off its decade-old citizen participation arm, Luminate, which has distributed $326 million since its inception.

Pierre Omidyar is also a philanthropist who believes that with the right combination of insight, ingenuity, ability, and time, change is achievable. The Omidyar Group creates, sponsors, and supports several organizations and initiatives.

Pierre and Pamela Omidyar have given more than $3 billion to causes ranging from underserved economic advancement to human rights, political accountability, and press freedom campaigns.

Pierre believes that everyone is born with equal ability but not equal opportunity. You will rarely be disappointed if you give people the opportunity to do the right thing. When I first began eBay, it was as a hobby, an experiment to explore if people might utilize the Internet to empower themselves by having access to a well-functioning market.

Pierre and Pam anticipate giving away all but one percent of their fortune within the next 20 years. They previously funded Tufts University’s College of Citizenship and Public Service, with the goal of “creating a community of graduates who can combine successful professions with active participation in society.”

Other Omidyar Foundation programs are supplying emergency communications technology to disaster zones throughout the world.

In 2011, Pierre and Pam received the Carnegie Medal of Philanthropy for the long-term impact of their work.

Pierre received the ‘EY Entrepreneur of the Year award in 1999 for his successful business, ‘eBay.’

This great entrepreneur received an honorary doctorate in public service from his alma mater, ‘Tufts University,’ in 2011.

He is one of the world’s wealthiest people, with an estimated fortune of $17.9 billion accumulated through the profits of his company ‘eBay.’

Pierre believes that one should explore their interest. If a person is passionate about something and works hard, they will be successful.

He urges people to become entrepreneurs for the right reasons. According to him, an individual should be an entrepreneur because he can make a difference in the world, not because he wants to make money.