Who said rich kids can’t be ambitious? Unlike the familiar stories of most successful people coming from poor backgrounds, the story of Evans Spiegel took a different turn. Meet Evan Spiegel, the spoiled child who became the youngest self-made billionaire.

In 2005, Evan Spiegel, the co-founder, and CEO of Snapchat was recognized as the youngest billionaire in the world.

If you had known Evan Spiegel since childhood, you would have been lost trying to figure out how Evan was able to become a self-made billionaire at that age.

Imagine waking up to the view of a fleet of luxurious cars, a personal chef, and regular vacations outside the country. This was the kind of life Evan had as a child. If he wanted, he could have chosen to relax all his life.

You could say the rich kid privilege Evan had as a child gave him a strong foundation for success. However, it takes a lot more to become the world’s youngest billionaire. Evan Spiegel defied the odds against him and got his reward.

THE BOY BORN WITH A SILVER SPOON

On the 4th of June, 1990, in Los Angeles, California, Evan Spiegel came into the lives of John Spiegel and Melissa Thomas, who were practicing lawyers with a fortune.

Evan Spiegel’s family had a thing for achieving great heights at a young age, as his mother was the youngest graduate of Harvard Law School.

At the time, Evan wasn’t too interested in extending his family’s legacy. All he wanted to do was to live his luxurious lifestyle, just as I would have done in his shoes. Why would I care about achieving so much when I could play video games and be served all day?

Evan Spiegel’s parents didn’t just give him freedom of luxury, they made sure to spend a fortune on Evan’s educational milestone at the crossroad school for Arts and Science, Santa Monica. This was where Evan Spiegel took an interest in Arts and Design.

At age 15, Evan Spiegel entered several colleges where he further pursued his interest in art and graphic design.

Despite being a young boy spoiled with luxuries, Evan was ambitious. He was able to balance his ambitions with his luxurious lifestyle.

Evan’s spoiled nature as a rich kid started to get the better of him as he grew older. The older Evan got, the more expensive and spoiled his lifestyle became. Who wouldn’t want to flaunt a luxurious lifestyle as a teenager knowing his family had a load of cash?

In 2007, Evan Spiegel’s parents separated, and according to the history books of rich kids, separation wasn’t the best thing to happen to an already spoiled child.

Evan moved into his Father’s newly acquired house after the separation. Evan’s father became concerned about his son’s lifestyle and began to question Evan’s expenses which led to their fallout when Evan requested a $75,000 BMW to replace his 2-year-old Cadillac Escalade.

Evan Spiegel moved out of his father’s house to his mother’s house after the clash with his father. His spoiled attitude went on and on, and he even started getting several tickets for speeding.

Although Evan’s personal life wasn’t a bed of roses, he still stood out as an excellent student.

He took up journalism in high school and exceeded all expectations on a journalism project. He was known for his persuasive skill back in those days and could convince anyone to get in on a project or business.

Evan didn’t take his academic excellence for granted, and neither did he allow luxury to stand against him and his education. He applied to Stanford University and enrolled in industrial design.

During his studies, he interned under Red Bull and an enterprise that engaged in biochemistry. Although Evan Spiegel had now started to be more accountable for his future, he couldn’t graduate from Stanford due to several failing credits. 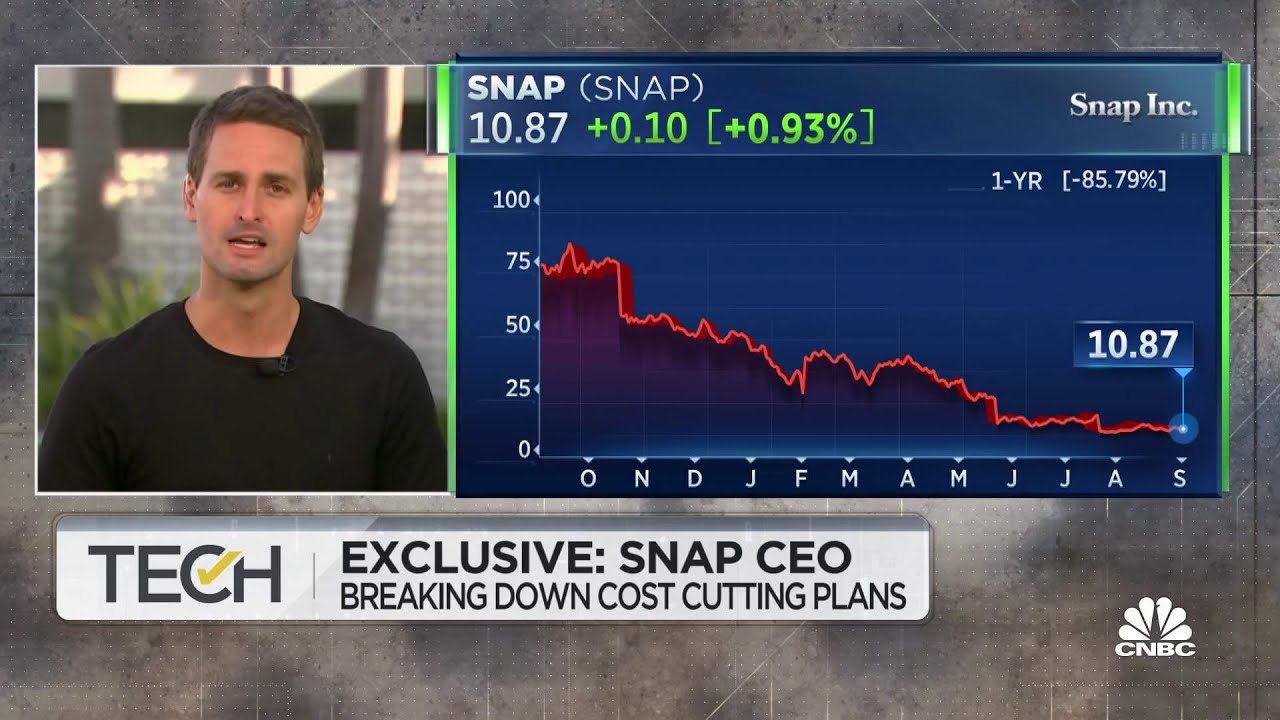 During Evan’s time at Stanford, he took an interest in computer technology. He practiced with Scott Cook, the co-founder of INTUIT till he got his vision.

Evan Spiegel had one thing in common with most successful people, and that was passion, and striving to fulfill it.

It was just another random conversation between Evan and his friends when they unconsciously mentioned the possibility of sharing photos for a few seconds before disappearing forever. Evan Spiegel and Bobby Murphy had a wonderful idea from the conversation.

This was how PICABOO, a mobile app developed by Evan Spiegel, Bobby Murphy, and Reggie Brown was born. The application’s purpose was to share moments for a few seconds before it disappears into thin air.

Finally! The rich spoiled kid had made it!

Well, not so fast.

PICABOO wasn’t initially a successful project. It had quite a bumpy start. It was initially proposed as a class project with his friend Bobby Murphy, who was studying product design.

When the project launched, Evan’s peers saw the project as something that wouldn’t hold much relevance. An app that allows users to share images just to be viewed for 15 seconds didn’t sound like a lasting plan to them, so they just decided to enjoy the project till it fades.

The result of the project was not as exciting as Evan and his team would have expected. Evan used his persuasive skill to talk his friends into downloading this application. Even after using the app for the fun of it, Picaboo wasn’t ready for the world yet.

In 2012, PICABOO was renamed Snapchat. Snapchat progressively became everyone’s favorite in the mobile app market, and it wasn’t long before Evan started building his own wealth.

By the end of the year, Snapchat received funding of $13.5 million from Seria A, which contributed to its rapid development. It didn’t end there, as many other investments followed through.

Now Evans could sleep at night, knowing fully well his dream had come true. Little did he know that the test of his future had just begun.

Mark Zukerberg was at a corner peeping at the huge potential Snapchat had and decided to throw irresistible offers and market temptations at Evan.

Mark Zuckerberg offered to buy Snapchat for a whopping $3 billion, but to everyone’s surprise, the rich kid rejected this offer.

What was Evan Spiegel thinking?

Evan Spiegel seemed relentless and wasn’t ready to give up his dream for any sum.

THE RISE OF SNAPCHAT 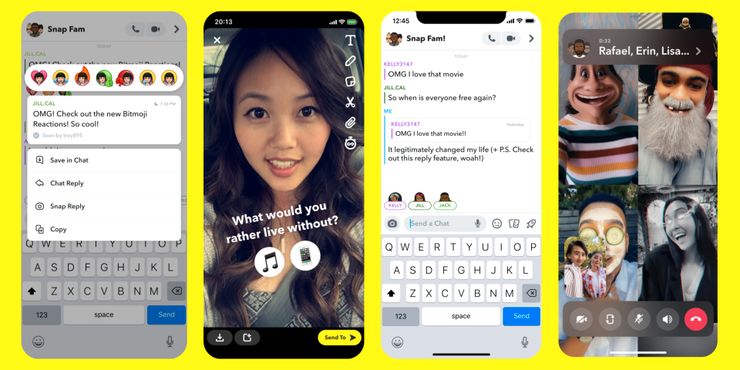 The year 2015, was the highlight of Evan Spiegel’s life. Snapchat Inc. generated revenue of $50,000,000 with 86 million daily users and was worth $15 billion. In the blink of an eye, Evan Spiegel became the world’s youngest billionaire at age 25.

He did carry on his family’s legacy after all.

Luckily for Evan Spiegel, he didn’t lose sight of his vision. However, Evan lost his friend and partner, Reggie Brown, who left the project after a lawsuit against the company but was later compensated for his contributions.

In recent times, Evan Spiegel’s net worth estimated at $2.7 billion, and Forbes recognized him as one of the richest people on earth. Evan was astonished by his success, just as many of us would have been.

“I am a young, white, and educated man. I am very very lucky. Life is not fair”

The success of Snapchat was unbelievable. Today, Snapchat has about 293 million daily users. 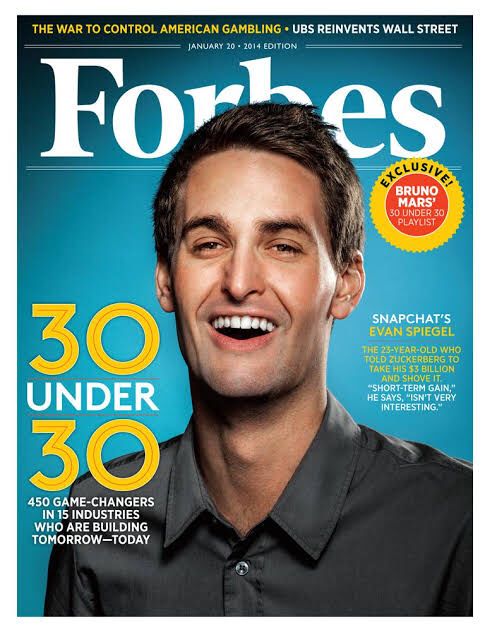 I’m sure you and I are stuck with the same question. Why didn’t Evan sell Snapchat for the whooping offer of $3 billion?

At that time, Snapchat wasn’t bringing in a lot for Evan and his team. Any start-up project would have jumped on to the offer from Mark Zukerberg, but Evan was satisfied with his dream.

Evan Spiegel wanted to create a space where people controlled access to their privacy as he was a private person himself. Sharing a moment for a few seconds might not have seemed like a big idea, but Evan and his team saw more to the dream and defended it at all costs.

“I’m now convinced that the fastest way to figure out you are doing something truly important to you is to find someone who will offer you a bunch of money to part with it.”

Evan believed having a dream and following it is important. If your dream can be bought or talked down, then it is probably not the right dream.

During Evan’s trying times, he learned some of these values.

-Do not be pressurized to give up on your dreams just because everyone thinks it is a bad idea. No one saw the value in Evan Spiegel’s dream initially, but he was determined and never backed out.

-Irrespective of who you are or where you are from, you can be anything you want as long as you have a vision. Your background doesn’t necessarily determine your future, just as Evan didn’t allow a spoiled rich lifestyle to ruin his ambition.

-You don’t always have to be so serious before succeeding. As long as you have your eyes on the price, you can get there.

Evan Spiegel inherited his parent’s charitable side as he is quite a philanthropist himself. Spiegel and his wife, Miranda Kerr once paid off all student loans from the 2022 graduating set of the Otis College of Art and Design.

Evan Spiegel is a loving husband and father. Despite his success, he still has the spoiled kid strain due to his luxurious lifestyle. That spoiled kid turned out to be one of the most successful people on earth.