The story of Chhouk, the elephant who has a prosthetic because of poachers - That’s what he can teach us

When they found him, Chhouk limped. With a part of his leg almost detached from his body. He was wrecked and had an infection. All because of a damn poacher’s trap: iron cables that tighten the elephant legs, blocking them there, ready to be captured.

Before I tell you the whole story, a little anticipation (Chhouk is currently alive and safe. Thanks to a prosthesis).

At the end I will tell you how you can escape from dark moments as well. I know, you will think I am telling you the truth, not helpful bullshit.

Keep reading this story, even if it talks about an animal and a special prosthesis.

It will reveal useful things no one told you before.

I am today an almost millionaire Italian entrepreneur, and I had to learn these tips the hard way.

You will be amazed.

Many that know these principles, today achieve results in life. In their professions, as in any other difficult life situation they faced.

Yesterday, while I was sitting comfortably in front of my laptop and I was enjoying a coffee, I was impressed by this story. It made me reflect.

Now I want to tell you about it. I want to help you reflect as well.

In 2007 Chhouk was a small Asian elephant less than 2 years old. In the Cambodian forest, he enjoyed the wild and unspoiled nature together with his family. Like so many of these specimens, it was a sight to see him walking in the glades.

“Then one day because of the wickedness, selfishness and ferocity of the poachers he found himself trapped. He got loose, but his foot was almost detached from his leg. He could have died from the infection.” 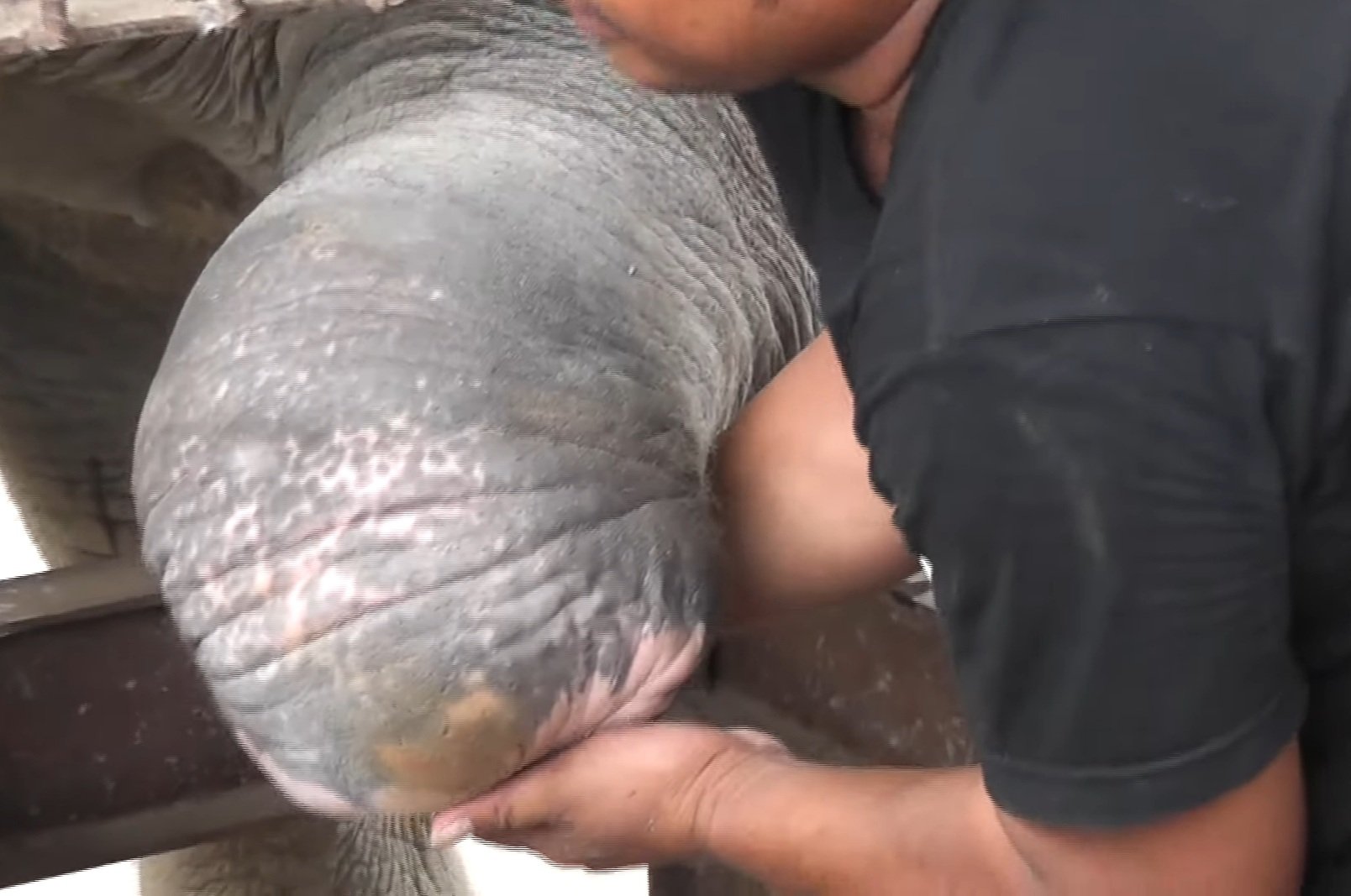 When the elephants end up inside those terrifying leghold traps, for them there is no escape. They pull, they get tangled, they call for help. And rusty iron enters the skin and muscles of the legs. The pain is unbearable and poachers win.

They reach them and cut their tusks off. All this to get rich. The suffering of the elephants in exchange for money.

As the WWF reports, these traps represent one of the greatest threats to animals living in Laos, Cambodia and Vietnam. Volunteers find, and destroy, thousands every year (in 10 years about 100 thousand). And they cause pain for many animal species.

Chhouk’s fate teaches us so much. Just when he was doomed, and perhaps no longer hoped for, a miracle happened. During a patrol in Mondulkiri, Cambodia, a group of WWF volunteers finds this small elephant.

It could not be moved because too weak, the director of the rescue and liberation program of the Wildlife Alliance organization, Nick Marx, decides to stay in the forest with him.

Here comes the coolest part, read on. Then I’ll explain why..

“Nick fed and cared for him for about a week, until he regained strength and energy.” He slept on a hammock for all those days (here he was given the name Chhouk). He loved him right away.

Thanks to this man, the elephant has passed the critical stage and then been transported to the wildlife and rescue center in Phnom Tamao, where specialists have treated his horrific wounds.

Here comes the original part, a case almost unique in the world.

The veterinarians are forced to amputate the part of the leg that was detached, up to below the knee. There was, however, a need for a solution. The love that volunteers continue to give to the little elephant was not enough.

A stroke of genius arrives. A personalized prosthesis was built, thanks to the Cambodian School of prosthetics. The specialists accepted the challenge and built in a few weeks a prosthetic for the young elephant. 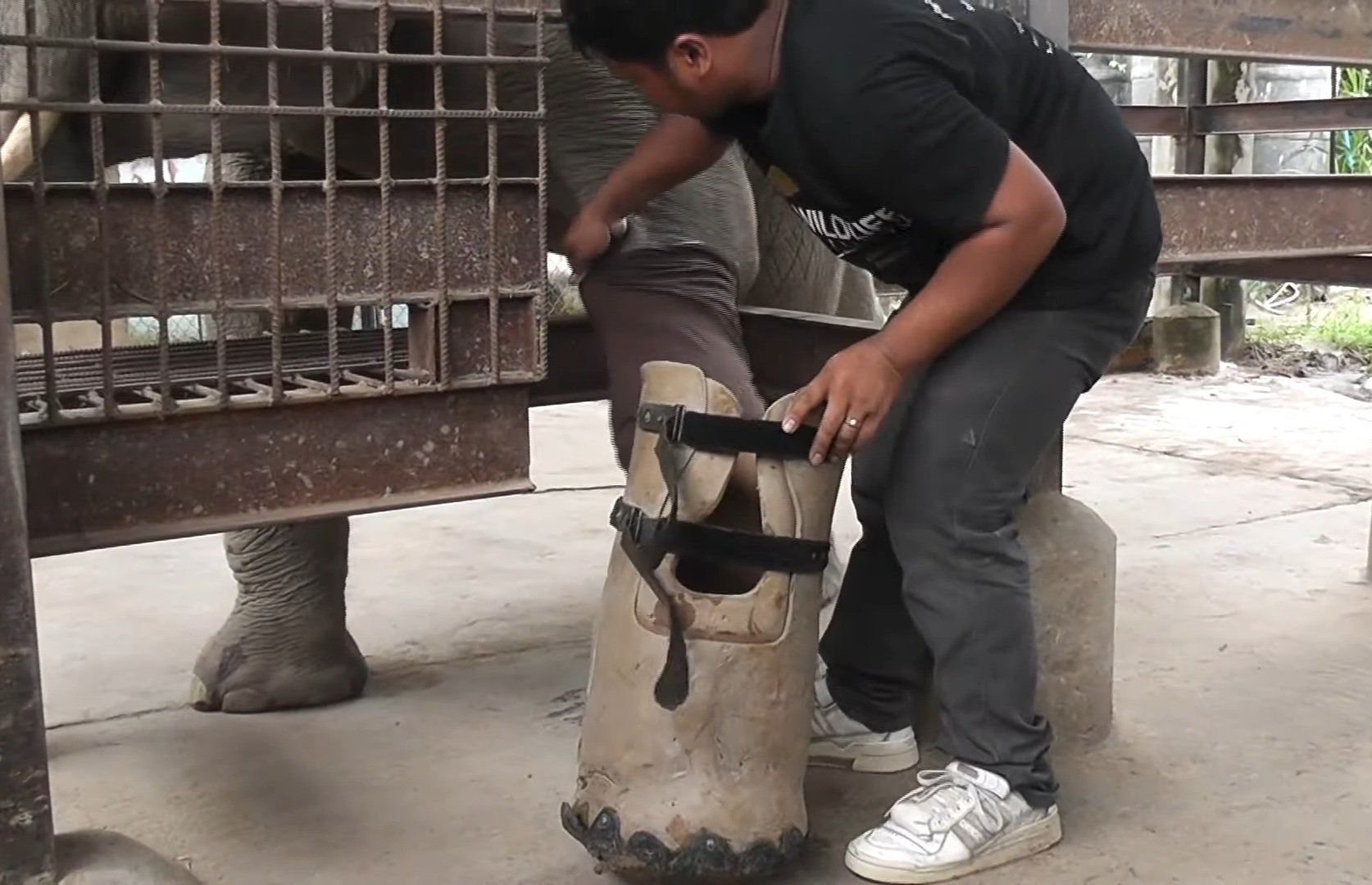 With this limb built, Chhouk returned to his wild life in the forest of Cambodia, happy and cheerful. With only three legs he would never have survived nature and predators.

So the intervention of other people with a kind and good soul was decisive for him. Today the prosthesis needs constant maintenance, and periodic replacements because the animal is constantly growing.

Now, if you’ve had the patience to read this far, I’ll tell you the messages that this story teaches us. That maybe the average person can’t grasp.

But luckily for you there is Nico, who in life has already overcome several problems and difficulties. And in this story I see those same passages again. The ones that, without the principle I’m about to tell you, you’ll never get over.

– The first is the awareness that people are the greatest resource we can have.

Yes, sometimes you meet evil people. Maybe you are thinking this.

But most of them are good people, and they are the ones who help us and save us from the moments of discouragement. In particular there is always one that makes the most of all the difference.

In Choock’s case, there were volunteers first, then veterinarians, and especially Nick.

Nick was decisive. Think long if you’ve ever met a mentor in your life. If not, find someone who can teach you and be there when you think you can’t do it.

– The second is that we must always have faith, remember things can always be overcome, even when we are tempted to think that everything is lost. Life always gives us a second chance

It’s what happened to the young animal that’s been the protagonist of our story. He seemed doomed, but no. Even with a prosthetic he could go back to live his life in the forest in Cambodia.

If you believe that the solution to a problem will be there, you will find that solution. It is well known who succeeds today. Like many entrepreneurs, sportsmen, actors, and other prominent American figures.

They accepted the problems and had faith, without anger and revenge. And they eventually solved those same problems.

Today, Chhouk is about 16 years old. He has practically reached the maximum size. And about twelve prostheses have been replaced. He’s the only elephant in Cambodia with a plastic and leather foot.

All this made it a symbol of both the Wildlife Alliance, but also of elephants in general. Especially for fighting poachers.

If you want to have some fun, amaze yourself or discover interesting things follow me on Twitter. It is becoming one of the more controversial and craziest profiles on Twitter: https://twitter.com/SirNickNite